In recovery, making amends is one of the healthiest and scariest things you can do. It can bring you healing as well as the person you are making amends to. In my experience, there have been people who forgave me, people who didn’t know what I was talking about because my error did not leave an impact on them, and people who refused to meet me halfway.

My goal is to reach the people I bullied so I can apologize to them. My bullying goes back to my childhood; I am 63 years old. My victims could be anywhere in the world, so I appreciate any sharing of this!

So, dear reader, if you know me, chances are I owe you an apology. I bullied and abused innocent people without realizing the harm I caused. The adults responsible for my well-being never taught me how to solve my problems. Saturating me in hatred, they taught me to hate myself and abuse others like they abused me. I learned what I saw every day.

Bullies raise bullies; I am living proof. My family abused me with such ferocity I ended up clinically depressed and burdened with complex ptsd, plus other mental and physical disabilities. A few years ago, I found out I am learning impaired and have amnesia. I have written what I remember from my childhood and it didn’t even fill three 8 by 11 pages. I locked the rest up in my memory I may never recall.

Sadly, there are millions who relate to what I am writing about because they live it too.

Sober for over 12 years now, I embrace my responsibility to apologize for my atrocious behavior. To be clear, I am not blaming my family for how my life turned out; I include them as a measure of accountability. My six abusers, including my deceased mother, have gotten away with what they did. And I checked; the statutes of limitations have all run out.

Growing up bullied by my family, I understand the truth behind it. It was never about the people I assaulted. Something my innocent victim did or said triggered unresolved issues stuffed deep inside me because my family never allowed me to voice my pain. Instead, they brainwashed me into self-loathing and self-destruction. I spewed that combination at innocent people who never deserved my savage storm.

And that behavior came out of nowhere. I remember one neighborhood girl I bullied when we lived in Huntsville, Texas. I remember saying to her what my mother and sisters said to me every day. I made that poor child cry and I remember feeling bad about it. I didn’t know what to do. I thought her behavior justified my talking to her the way I did.

While playing chess online in the early 2000s, I lost a game and messaged my opponent an atrocious attack. So, he went to the game forum and warned others about me. I found this out from the next player I met. I went looking for the post and read it. It shocked and angered me at the same time. I have a vague recollection of reading his message and dismissing it immediately. I ignored it.

Working on the inherited toxic waste that fueled my mental illness problems dominating my entire life, I slowly realized the damage I caused. To do my best to repair that damage, I worked and continue to work hard to heal to be strong enough emotionally to apologize and find out what my victims need me to do to make it up to them. I waited because I needed to be my strongest possible to give it my best.

So, I know I am ready because my most significant achievement has been to eliminate all cravings I had for alcohol and for emotional overeating. I now live craving free. My brain is quiet and I can think. I get right to sleep at night with no sleep aids. My brain tires easily, but I am managing much better now. I am happy, sober and productive. My self-esteem is healing nicely. Weighing 298 in June I have lost 28 pounds since.

But, back to my topic, there are also people I owe money to. Not being able to work a standard job because of my mental and physical disabilities, I funnel what little energy I have to improve my writing. For example, I enrolled in online courses through St. Louis University in St. Louis, MO in August 2015, and learned a lot there. Flunking out because of my learning disability, I continued to improve my writing on my own. Thankfully, I found writing software that guided me as I continued to learn. And there are oodles of websites about proper grammar and I read articles on how to improve my writing.

That said, I am determined to present writing people will want to buy because I will get myself out of poverty and off of welfare. I believe money is coming; I am not sure when yet, but I know it is coming. There must be something I can do with what I have learned about addiction and recovery to earn my living, even with my disabilities. I want to live my life as a responsible adult helping others with what I know best: recovery from addiction.

Back to my topic, could we know each other?

This is me at my heaviest.

Here is some additional background on me that might help you remember: Born on February 1st, 1957, I went to school under Bettina Eason and Alberta Irene Eason. Mother was a university professor and spoke with a heavy Venezuelan accent. I have two older sisters named Annabelle and Melissa. My father’s name was Joseph Kenneth Eason. My parents divorced when I was a toddler; mother got custody of us three daughters. We lived in Little Rock, Arkansas until early 1960s, then moved to Fayetteville, Arkansas. Mother moved us about every two years. I have ideas on why, but I don’t know the real reason.

I attended St. Joseph’s Catholic School for the 1st and 2nd grade. After that, we lived in Wilmington, North Carolina for my 3rd and 4th grade, in the late 1960s. I think I went to a Catholic school, then switched to a public school, maybe. I cannot remember. Two years later, we moved to Huntsville, Texas. That would have been 5th and 6th grade. I went to a public school because there were no catholic schools there. Around 1969, 7th and 8th grade were in Shreveport, LA at Pope Pius the 13th. I am unsure of that school’s name. Somewhere during that time, my oldest sister left home and that summer, we went to mother’s hometown in Maracaibo, Venezuela, to visit her family.

One day while we were there, mother barged into my room and told me I would stay behind to attend a Spanish-speaking boarding school in the Andes Mountains.

I spoke no Spanish.

Meanwhile, Mother and Melissa returned to the states.

When the time to start school arrived, I stayed with an aunt and uncle I had never met who lived close to the boarding school. Spanish nuns ran the school. The Mother Superior and one student spoke English.

Struggling with culture shock, I stayed in Venezuela for about 8 months. I returned to the states around spring and by that summer, mother moved us to Caracas, Venezuela in 1970 or 1971. That is where I went to high school. I attended three high schools there. I remember the names of two. One was Santa Rosa de Lima and the other was Instituto Politecnico Pestalozzi, where I graduated from high school in Spanish.

After that, we moved back to the states, to Little Rock. I went to the University of Arkansas at Little Rock and ended up flunking out. I became Richardson when I got married in the early 1980s. I left my husband after a few years of marriage and moved to St Louis. I lived there for over 30 years. I worked a lot of different jobs. I worked some as a waitress; I got into optics and a few sales jobs. I started calling myself Landon around 1993 when I lived in St. Charles, MO. I worked until I became disabled in early 2000s. I got my name legally changed in 2005 from Alberta Irene Richardson to what it is today, Landon Clary Eason. I now live in SE Missouri.

So, if I owe you anything, please contact me so we can work it out: 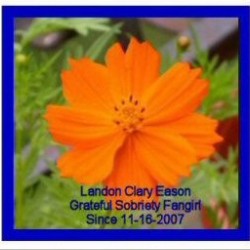 happysobercrafter
With a ton of hard work, God's Grace, and sheer stubbornness, somehow I managed to survive my upbringing, AND lived to write and blog about it! Happily sober for over 13 years now, I blog about my two favorite topics: personal growth and creativity.

Latest posts by happysobercrafter (see all)
error: Content is protected !!